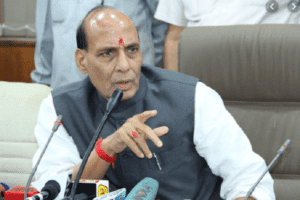 According to a report by The Times of India, Defence minister Rajnath Singh said that blockchain, artificial intelligence and big data are needed for next iteration of combat while addressing an 80-nation plus envoy roundtable before the DefExpo 2020 that will be held in February next year.

Singh commented that the defence industry is going through a change to cope up with the new technologies and employ them to safeguard the safety and security of critical infrastructure. He added that AI, big data and blockchain technologies has revolutionised warfighting methods in recent times.

As the mediums of war are shifting from air, land and sea engagements to cyberspace and space, countries need to develop these new technologies as per Singh. Singh further said that its not enough to just prepare for contingencies, but it is necessary to repel threats from multiple sources and respond proactively if needed.

The report also mentions that Singh said in the DefExpo, there will be a showcase to put out the aim to achieve a turnover of $26 billion approximately in aerospace and defence goods and services by 2025. The event will also showcase the plans for defence corridors in Uttar Pradesh and Tamil Nadu where investments commitments of $1 billion have already been secured.