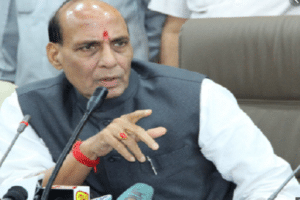 Indigenisation and self-reliance in the defence sector

Singh said that the government is open to new ideas. It is determined to use the energy, entrepreneurial spirit and enterprise of the private industry in the defence sector. He also stated that the government will make all efforts to remove any roadblocks. It will work together to achieve the goal of indigenisation and self-reliance in the defence sector.

He also pointed out various reforms introduced by the government under the ”Make in India” initiative. The government aims to achieve $26 billion defence industry by 2025 and provide employment to two to three million people. He added that the government aims to create an ecosystem that will provide a platform to both public sector and private sector to work together and contribute to nation-building.

Some reforms that Singh highlighted include setting up of defence corridors in Uttar Pradesh and Tamil Nadu, simplification of industry licencing process. He also talked about the increase in Foreign Direct Investment (FDI) cap and steps taken to promote defence exports. He mentioned the establishment of Defence Investor Cell as well.

Singh also said that the government has provided trial and testing facility to the private sector. It has also come out with schemes for startups and small and medium enterprises to promote innovation. He also mentioned that the Strategic Partnership (SP) model has been introduced in the Defence Production Policy. Under this, the private sector will be able to manufacture fighter aircraft, helicopters, submarines and armoured vehicles.