Ensuring the right driver is paired with a particular LED light will ensure a longer life for the lighting fixture. This article is a short primer on how to make the perfect choice.

A light-emitting diode (LED) driver regulates the power required for an LED or array of LEDs. The LEDs are low energy, lighting devices with a long life span, and hence require specialised power supplies. Using the wrong driver will result in LEDs becoming too hot and unstable, leading to failure and bad performance. To ensure the LEDs function perfectly, the driver needs to supply constant power to it. The driver also prevents the LEDs from failing prematurely by controlling thermal runaway, which is a phenomenon wherein an increase in the temperature of an operating LED increases the current. The drivers ensure that the current and voltage remain within the operating range of the LEDs, regardless of fluctuations in the mains supply.

How to choose an LED driver
Every driver is not suitable for every LED application. The choice needs to be made based on certain factors, the most important being whether you need a constant current (CC) or constant voltage (CV) LED driver – or both. CC drivers provide a fixed output current and may have a wide range of output voltages. They allow more control and higher efficiency, and can be used for single bulbs or a series of LEDs. They are often used for office lighting, mood lighting, retail lighting, LED downlights, LED signs and entertainment lighting. The only drawback is that if the circuit is broken, then none of the LED lights will work.

CV drivers provide a fixed output voltage and a maximum regulated output current. They can be used to run several LED lights in parallel, such as LED strips or strings. They are often used for outdoor lighting, street lighting, stage lighting, moving signs, and architectural lighting. It’s worth noting that some LED drivers contain both CV and CC options. These drivers will run in CV mode during standard operations but will switch to CC mode if the output current crosses its rated current limit. If you need a driver that can handle multiple applications, this type of driver could be your best option.

Other factors to be considered when selecting LED drivers are output current, output power, output voltage, the LED driver’s IP rating, the enclosure, dimming capability and the compliance with international regulatory standards such as the UL1310 for safety. A driver should have the output power, voltage and current that your LED requires, at a minimum. However, choosing a driver with a higher value will provide extra safety to ensure it won’t run at full power, which could end up shortening its life span. If you use a CC driver, make sure the output voltage exceeds the requirements of your LED lights. The IP rating indicates the environmental protection provided by the outer casing of the driver against the ingress of moisture, dust and other objects or liquids.

Pulse-width modulation dimming can be used on all power supplies. This is because PWM dimmers go in-line with the strip lights, dimming on the 12V DC side of the circuit. PWM dimmers pulse the lights at high frequencies to change the perception of light to the naked eye. The higher the frequency, the brighter they will be. TRIAC dimming allows for LEDs to be dimmed with standard dimmers. These power supplies work by varying the power on the AC side of the circuit via a TRIAC dimmer. The change in power that the dimmer creates on the AC input side will vary the voltage on the DC output and control the brightness of the LEDs. TRIAC dimmers can be found in common hardware stores.

The concept of the DoB – driver on board—is also becoming popular. This is a chip that acts as a driver. Since it’s a solid-state device, its life span is supposed to be almost similar to that of LEDs.

LED drivers that use high voltage AC power are called AC LED drivers, while low voltage DC drivers are extremely efficient and reliable. So it is important to know the LED’s specifications to pick the right drive currents and heat-sink requirements. 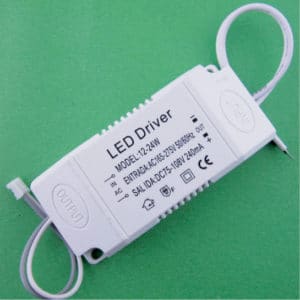 And if the forward voltage LED solution < output voltage range driver, there is a risk of unstable behaviour on the LED module (flicker).

Other criteria
LED drivers operate most efficiently if they are used within their temperature parameters. The higher the efficiency percentage of the driver, the more power you end up saving. Other factors to consider are its junction temperature, the application of the fixture, the space constraints within the fixture, the commercial viability, etc. For most of the applications, low voltage DC input LED drivers (5-36V DC) and high voltage AC input drivers (90V – 300V) are recommended, primarily because of their reliability and stability.