Prasad will have to balance the demand for lowering spectrum base prices and allocating spectrum at the right price to ensure no loss to the exchequer. 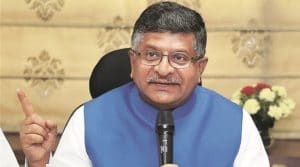 Ravi Shankar Prasad has been appointed as the new minister for telecommunications, while he retains the IT and law ministries in the second innings of the Modi government.

Prasad has been a three-time Rajya Sabha MP and has been instrumental in delivering the Modi government’s Make in India program, with multi-crore investments from top manufacturing companies from across the world. In 2019, there were 268 mobile and ancillary manufacturing units in India. Under his leadership, India became the second largest mobile phone producers in the world in 2019 from just two mobile factories in 2014.

During his time as telecom minister, the most successful spectrum auction in India that fetched Rs. 1.10 lakh crore of revenue was conducted. Policies such as spectrum trading, spectrum sharing, spectrum liberalization, defence band identification, virtual network operator, full mobile number portability and policy for sharing of active and passive telecom infrastructure were cleared to pave way for massive foreign investments.

What’s on the agenda?
As the new telecom minister, Prasad’s top priorities may be to nurse the industry back to health, besides laying the ground for the deploying 5G technology in India amid a push to drive the country into the digital age. Having been familiar with a plethora of issues in the telecom sector during his earlier tenure from May 2014 till July 2016, Prasad would also consider keeping revival of BSNL and MTNL on top of his agenda list. However, other issues will also need his immediate attention.

To begin with, the critical issues of reviewing of levies and fees such as license fee, spectrum usage charges (SUC) and defining what does the government mean by adjusted gross revenue (AGR), will have to be taken up, said industry executives. These issues have also been highlighted in the National Digital Communications Policy (NDCP), the fast implementation of which will also be a key milestone for the new government to achieve.

As the new minister, Prasad will have to balance the demand for lowering spectrum base prices and allocating spectrum at the right price to ensure no loss to the exchequer. At the same time, it will have to ensure that there’s adequate spectrum being put up for sale at every auction.